If I didn’t listen to NPR, I think I’d never come up with blogpost ideas.  This time, it was listening to Science Friday that did it.   Ira Flatow was interviewing Michael Nielsen, whose book, Reinventing Discovery:  the New Era of Networked Science appears to be something I should get my hands on.   During the interview, Nielsen discussed the Galaxy Zoo, a project that allows non-scientists to get into NASA’s Hubble Space Telescope archive, and help classify galaxies by shape.   So far, more than a quarter of a million people have participated in the project.  That’s scaling up something fierce, and something that would not have been possible without the kinds of digital tools we now have at our disposal.  It’s also a kind of crowdsourcing. a kind of knowledge production made particularly possible and accessible by tools like wikis, blogs, etc.

Crowdsourced knowledge is trusted by Digital Residents (so far as we can tell) far more than by Digital Visitors, who still seem to insist on institutionally produced knowledge as the authoritative standard.  Some fields, such as Bioinformatics, have scholars working with projects so novel that the peer-reviewed literature just has not been produced in enough quantity to be helpful to researchers when they are actively engaged in their research–they turn to blogs, tweets, emails, phone calls, and face to face conversations to keep up with the field–the latter two happening, I suspect, only after quite a bit of the first three take place.

My own library has launched a Digital Scholarship Lab, and while we expect that at first, there will be a large Digital Humanities component, I think it’s no accident that we are naming it Digital Scholarship, and Nielsen’s book makes me think my hunch is a solid one–these digital tools are, as he said in the interview I heard, fundamentally transforming the ways we construct knowledge, broadly defined.  This transformation is not limited to a particular field or discipline, it is global, and it is utter.

It is also frightening and destabilizing to many traditional academics, who see in digital tools as a way to trivialize, ignore, or fail to achieve the insights gained through traditional scholarship with old fashioned tools like books, paper,  images, and manuscripts.  Peer-reviewed journals are increasingly threatened by Open Access, blogging, and twitter, as primary ways to share and discuss scholarship.   Twitter and blogs make it possible to have a “conference” at any time, no matter where you are in the world–we do not have to wait for a national disciplinary conference to engage in scholarly exchange, nor do we want to wait anymore.

Nielsen pointed out that junior scholars and senior scholars tend to be happy to get on board with radical changes, and I can see why:  junior scholars are a part of the changes, they are fish in the water already; senior scholars are in a position to actually make change happen, and they are senior scholars, so less is at stake for them.  Scholars in the middle of their career, either trying to get tenure, or just post-tenure and now with even more work to do, may well feel that they’re being told to change doing everything that, up to this point, had been working out just fine for them.  It might be like coming up to someone halfway through their dissertation and insisting that they try this new reference management system.  Or making someone who is writing a book switch word processing software just as they are writing their conclusion.

I don’t have a conclusion here, just a string of thoughts that have come to an end (for now). 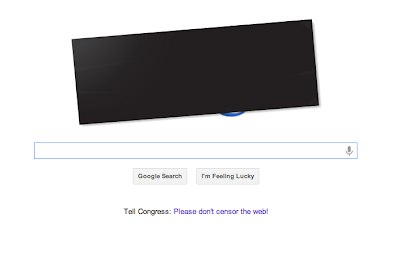 I’ve circulated an email to some of my key contacts in my particular corner of the academic world, and thought I’d see if I could get a response via blogpost, just for kicks.  So, here’s what I’m asking:

So, with the SOPA protests online, I’m curious the extent to which you think it’s affecting your ability to do the things you want and/or need to do today, for academic or non-academic purposes.
If you’ve got the time and inclination, would you please tell me:
1)  what were you planning to do today that involved being online?
2)  were you successful?
3) if not, why not?
4) if so, could you do it as you originally intended, or did you have to come up with a work-around?
Would you like to answer the questions?  Please do so in the comments.

This video (it’s about 20 minutes long) gives some more of the history and rationale behind the V&R project I’m working on, in collaboration with these two scholars, Dave White (Oxford), and Lynn Connaway (OCLC).

Nice still shot of Dave there–if you’re interested, it’s worth watching.  This project is trying to break down assumptions about how, when, and why people of all ages look for, acquire, and evaluate information.