Mastodon
So at this point I’ve given 2 different versions of this talk, once at UNC Greensboro, in the library, and just recently at the University of Huddersfield, also in the library.  I talk from a combination of notes, script, and the Prezi, so this is an approximation, but I’d like to share it because it’s a relatively coherent statement of what I think is possible via qualitative work like mine, and where I think academic libraries can create opportunities for their voice to be heard within higher education generally.  Special thanks to Erin Lawrimore for inviting me to UNCG, and to Bryony Ramsden and Kathrine Jensen for getting me to Huds.

I don’t get much chance to speak about the nature of my work in a systematic way, and this is giving me a chance to put together thoughts that I’ve been accumulating over the past year or so about the nature of the information that informs library policy. It has been changing over time, and the attention paid to things like qualitative research marks a real shift in administrative focus, and has implications for assessment, as well.
I’m speaking to you today (as I speak every day) as an anthropologist, and so an outsider to library science (but not to higher education, as I am an academic through and through). But I am also someone employed by an academic library. I was hired as library ethnographer in 2009, with arrival of a university librarian who had been at Rochester, where Nancy Fried Foster was at the time. Her hire inspired by the participatory design policy of places like Xerox, who hire social scientists, including anthropologists, to do research into user behavior, to inform their products.
Nancy’s work has certainly made participatory design a highly visible part of what qualitative research agendas can do in higher education, but I’ve been asked to take on an ethnography of academic work generally, to find projects (small and large) that illuminate the behavior of students and faculty on our campus, not just within the library.
The use of words like “disruptive” and “provocative” within library policy discussions (and higher ed generally) has become cliche, but I find them useful in trying to frame the role for anthropologists (and even other social scientists) in academic libraries. Positions like mine are a provocation, not just to library-land, but to Higher Ed. generally.
So, why be provocative? The Anthropology meetings in November of last year included a panel on liminality (included Nancy Foster, as well as researchers from Intel and Xerox). The liminal state is one of “betwixt and between,” of being poised on the threshold. Again and again the panelists made the point that the presence of anthropologists in industry and institutional settings creates a liminal space, which in turn is an opportunity for change and innovation. Qualitative research provides opportunities for change, moments to disrupt current practices, to dwell with the possibility of something else.
The researcher from Intel pointed strongly to the potential for innovation that comes out of persistent and embedded anthropological attention to technology and the processes involved in producing that technology. She worked with engineers, who were so immersed in the production of technology that they lost sight of the people who would be using it.
Likewise, anthropological attention to uses of technology in information seeking can help us think more carefully about how we use technology to engage with people in academia, students and faculty alike.
I know there are people with anthropology and sociology training working as librarians now, but the qualitative work is seldom their full time job (so many people run up to me at library conferences and confess their undergraduate degrees in anthropology!). Myself and Andrew Asher (At Bloomington) are the only two I am aware of who are employed full time by universities in the US, and I know of one anthropologist who was just hired by the London School of Economics in the UK.
I’ve blogged before about the role that we play in libraries as anthropologists, especially regarding the discussion we hosted at the 2013 AAAs in Chicago.
The idea is not to thumb our noses at current practice, but to actually provide a place for the new to emerge. Margaret Mead talked about anthropology as making the “exotic familiar, and the familiar exotic.” She is talking about the power of cross-cultural insights allowing fresh eyes on our own society, the practices of others helping us think critically about our own practices.
We are fundamentally searching for insights into why. Anthropology assumes that there is a logic to people’s behavior. It’s not enough to describe or count the things people do or interact with or own or use.  And furthermore, there are things that we can observe are important that we cannot count–or there are things we should be counting that we don’t know are important. We need multiple ways of talking about what is happening–a holistic approach can include counting, but needs to incorporate other ways of observing/describing. Ethnographic practices can provide such a thing. And I would argue that they are most effectively deployed as a part of a full-time qualitative agenda, not just carved out of already existing jobs, or brought in short-term.
Qualitative methods need explanations and defense in part because they are not the norm in library-land, and are still contested outside of qualitative-centric fields like anthropology and sociology. My experience working with LIS has reflected this–I have participated in longitudinal qualitative studies that my LIS colleagues are still still very very nervous about if it’s not embedded in a survey that we also conduct. I see this concern about generalizability, etc. reflecting a general unease with actionability of qualitative data.
BUT:
Higher Ed is quantitative in part because of a policy orientation where evaluation is the equivalent to counting and measuring (think: grades). Assessment, however, should be about information that can lead to changes, and ideally, improvements. A reasonable question to ask is to what extent the massive amounts of quantitative data libraries collect every year has led to improvements
For example, UNC Charlotte Atkins Library recently participated in the MISO survey;  we now have all of these numbers, what do they mean? For example, these “satisfaction” graphs from various constituencies: 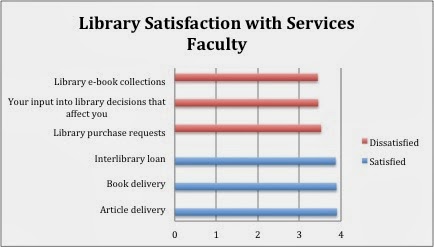 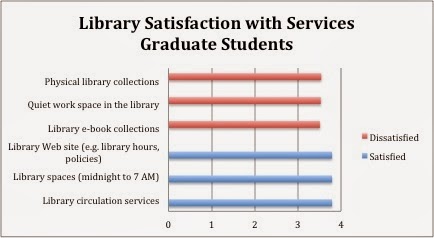 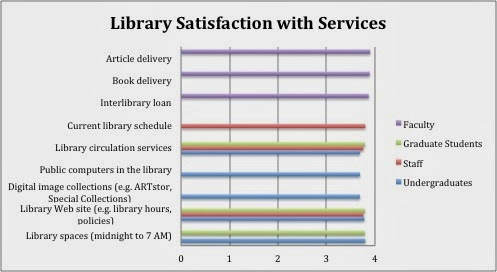 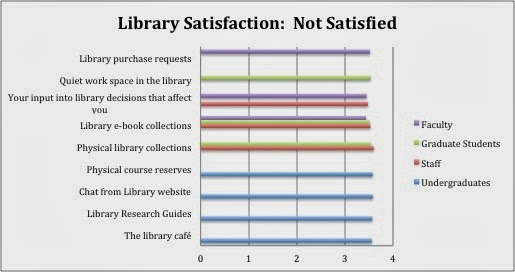 All the bars are basically the same length.  What can this mean?  What does it mean when we ask about “satisfaction with the library?”  How can that be quantified? Why would we want to quantify that?


Qualitative data can move library improvements in a way that traditional treatment of quantitative data has not.  This is the power of insights, of epiphany, of something beyond just description. Evaluation and analytics are descriptive, and not necessarily with an eye to change.  Assessment should be about that which can drive change.
We cannot get rid of quantitative data, nor should we want to, but I believe it needs to be embedded in the context provided by qualitative researchers.  Approaches to our quantitative data can be transformed with considered uses of qualitative research in libraries, and higher education generally.
Think of individual projects that characterize themselves as “mixed-method.” Imagine a “mixed-method.” library, drawing on both sorts of information.
What does that look like?

It can look like me: the Anthropologist in the Stacks.  The permanent staff presence of a qualitative researcher means non-LIS people working within the library. Disciplinary knowledge from outside of LIS can illuminate higher education policies, not just within library, but across the university. So, I am not just talking about a mixed-methods library, but an interdisciplinary one.
(I have blogged already about examples from the Atkins library –here is the point in the talk where I use Prezi to give visual examples of the kinds of data I’ve been collecting, including Photo Diaries, observations, and cognitive mapping.   If you peruse the stuff tagged #anthrolib you can get a feel for it, if you haven’t already.)

We need to know what people are doing to effectively engage. Anthropology, ethnographic techniques, qualitative research can help us learn this.  There are additional implications for the position of academic libraries within their institutions, once they commit to a qualitative research agenda.

For example, at UNC Charlotte, the library is represented on a campus-wide meeting about Student Success.  We are positioned as colleagues within the university, rather than as “helpers”–we are part of a scholarly community, and we also provide, in the library, a neutral ground for the coming together of scholars (including ourselves).

There is tremendous potential for libraries in higher education to be sources of qualitative research about student and faculty work/behaviors.  This research can give us a voice on campus around issues that people in Higher Education are interested in:  what students do, where they go, what faculty do, why.
Anthropologists and other social scientists can produce data which may be brought to bear on policy decisions at the college and university, and which has the potential to positively impact student academic success. The fact that these studies come out of the Library has implications for the role academic libraries can play in higher education generally, potentially transforming the kind of voice libraries have in university policy, because we are producing information/data that no other sector of higher education is doing.   This is powerful.  We need to do it more.
********************
Both times I gave this talk, I just sort of stopped there, and asked for questions, and was really gratified by the engagement and thought that was put into the discussion.  I wish I had transcripts to share of what we talked about at UNCG, and also at Huddersfield.
Dave Pattern and Bryony Ramsden were kind enough to tweet some of the content of my talk, I Storifyed it here:

For the conclusion of this blogpost, I will simply share an image of part of my speaking fee at Huds, safely ensconced in my bag, on the train back to London.