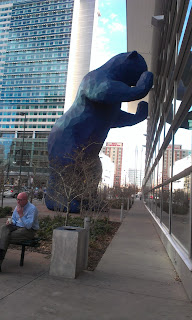 I went to my first ever EDUCAUSE convention in Denver this past week.  I Storified it already, and that was a good way to give a general feel for what it was like for me to be there (other people have given good general run-downs as well, about the three keynotes,  the range of vendors and products in the Exhibit Hall,  some aspects of the never-ending MOOC discussion,  and the CIO’s perspective via Twitter, and also in panel discussions. 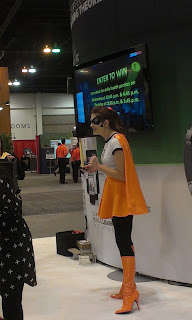 It was really something.  I call it a “convention” rather than a “conference,” because there was a huge trade-show element to it that, while not completely unexpected, was pretty unfamiliar to me.  Probably because I’m never the one who companies are trying to sell things to (unless you count books).   I’ll tell you what, you don’t see people in outfits like the one pictured to the right every day, not even at anthropology conferences.

EDUCAUSE appears to me to be structured to expose CIOs to a variety of products, and in particular to sell them on those products (its being described as a “prestigious conference for IT and CIOs in higher education” in one of the blogposts linked to above pretty much supports that impression).  Educause (the organization) also appears to use EDUCAUSE (the convention) to provide a space for CIOs to talk to each other about what is happening on their campuses.  There’s a CIO track that is clearly marked in the EDUCAUSE program, and it’s interesting to think about the bubble that CIOs (and other high-in-the-management-structure academic IT professionals) move through in EDUCAUSE, and what that means about how they do or don’t get exposed to the more academic presentations that are also a part of the program. 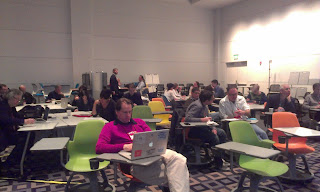 I was tremendously worried about our 8AM on Friday session time, but it turns out for a variety of reasons that our Visitors and Residents presentation was well-attended by really engaged EDUCAUSE-goers. I was co-presenting with my colleagues Lynn Connaway, from OCLC, and Dave White, from Oxford University.

We benefited in part from a lack of competition–the trade show was over as of the night before, and the keynote speaker was yet to come.   But people really wanted to hear what we had to say about how people interact with the web, and in particular really wanted to talk about how the ways they and their constituencies uses of the web could map to this pole-chart (given as an example by Dave, who was walking them through the exercises): 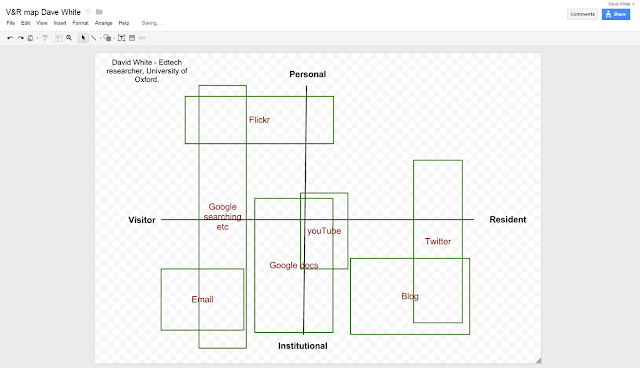 We managed to capture (via a variety of GoogleDocs, and cell phone pictures of whiteboards and notepads) about 20 maps of individuals.  They are a delightful variable bunch.  For example: 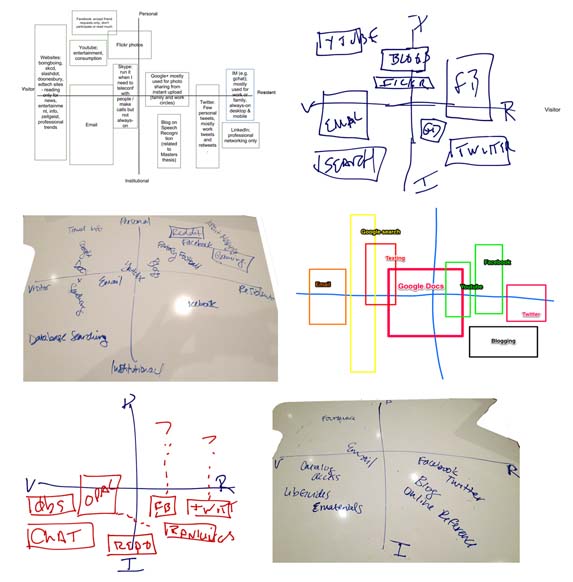 This is a digital collage of four of the maps that our session-goers generated about their own modes of engagement.  The top pole is Personal, the bottom pole is Institutional, the far left is Visitor-mode, and the far right is Resident (if you’re forgetting what those terms mean, I’ve blogged about our project more here , and here, and you can always read about it on Dave’s blog here.).  Essentially, we were trying to get them to think not just about the digital tools they used and places they visit, but what they really did with those things, and how that mapped to the V and R continuum in relation to the spheres of their personal and institutional lives.

Here’s what happens when you highlight just the Facebook part of their maps: 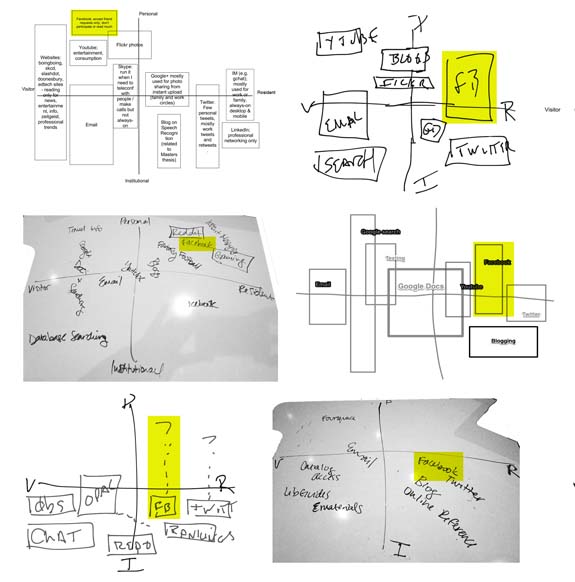 Facebook is literally all over the map(s)!
Some people use the private messaging part of FB more than wall-messages and other public forms of Facebooking, so that puts FB on the V side of things.  Some people only use FB for personal things, which puts it way at the top of their maps.  Some people use it nearly exclusively in Resident mode, with lots of wall  posts and other activities that leave persistent digital traces.  The number of long rectangles, indicating FB use that spans personal and institutional lives, as well as movement along the V and R continuum, are lovely demonstrations of just how wide the range of types of engagement with Facebook can be.  And, that’s just one example.

A couple of things crystallized about the V and R analysis we’ve been working with as I talked it through in the session, especially in relation to thinking about how people engage (or don’t) with the services and tools provided by their institutions.  I think about, for example, the struggle to get students to communicate within Learning Management Systems, when we know that they’re communicating all over the place on Twitter, on Facebook, and via text.  One problem may well be that people expect to be able to hang onto the content that they generate in these systems (perhaps a problematic assumption, but a powerful motivator nevertheless).  So, if they build a social network (and all of the attendant content and relationships) within an institutionally-based system, they will not be able to take it with them when they leave the institution.  With Facebook, on the other hand, just because an individual changes jobs, schools, what have you, doesn’t mean they will have to migrate all of their digital content to another system–they can just friend or unfriend, change their security settings, etc. (*I KNOW these are problematic assumptions.  I’m making an argument here that people are motivated at least in part by these problematic assumptions about how this stuff is Theirs).

Another thing that was just made more clear to me (although I was already fairly convinced of it before) is that it’s important for institutions (and the people who work for them) not to confuse particular digital tools or places with specific modes of engagement or behavior.  There is no universe in which Facebook ALWAYS = Goofing Off, however much people may use Facebook as an equivalent to time-wasting.  There is no universal mode of engagement with Twitter.  Some people use it as a news feed.  Some people use it to connect with friends.  Some people use it as a clearinghouse for all of their professional contacts and relevant content.  “Being on Twitter” is a meaningless statement without knowledge of the content of that presence.  In the same way that a person can be in a cafe to meet and be with friends, or to be alone to get work done on an article they are writing, or just to be in a place to get a cup of coffee and then leave, the places/tools on the internet like Twitter and Facebook are given meaning by the intentions of the people who use and inhabit them.