So Google has a self-described “anthropologist of search,” and his blog describes his new “A Google a Day” trivia game. 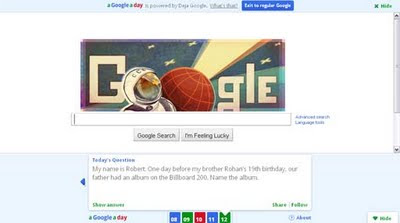 The game itself appears to be the point of much of the coverage–although at least one journalist sees the game as a potential search tool in and of itself.  Hardly anyone points out that what this game will actually do is allow Google to gather information on how people do search.  (this is not a secret–Google says that’s what they’re doing) I wonder if they will share with the rest of us what they learn, or just plow their knowledge back into Google.  I wonder if we could ever do something similar with the way that people search for information in our library.

People who know far more about search technology than I do doubtless have much to say about Google’s efforts.  What do you think about their using a trivia game to gather information?