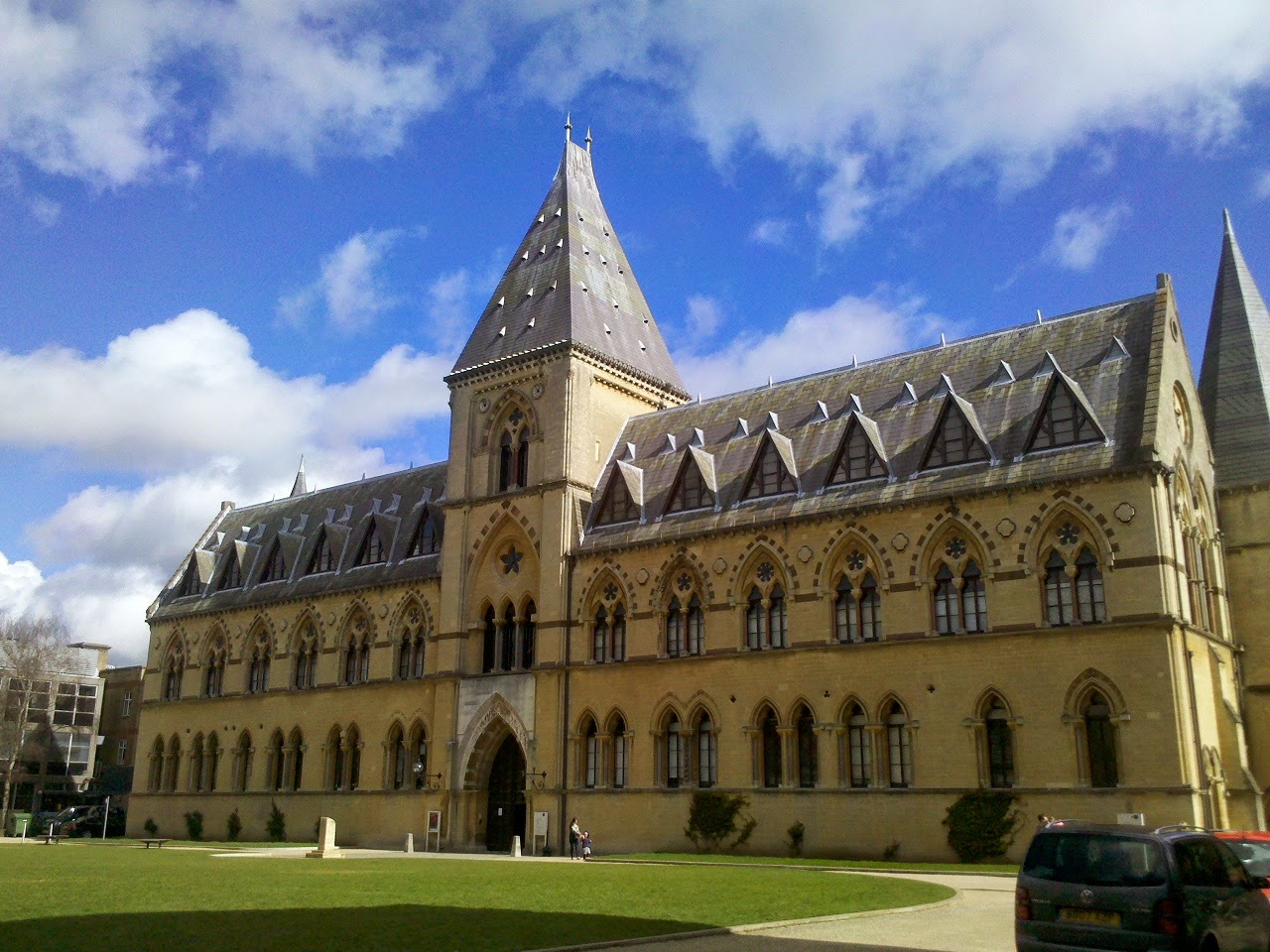 My favorite thing about Oxford (once I figured out that DS Hathaway was not in fact waiting for me in a pub alongside the Thames) was the Pitt-Rivers Museum.  You have to walk through the Oxford Museum of Natural History to get to it. 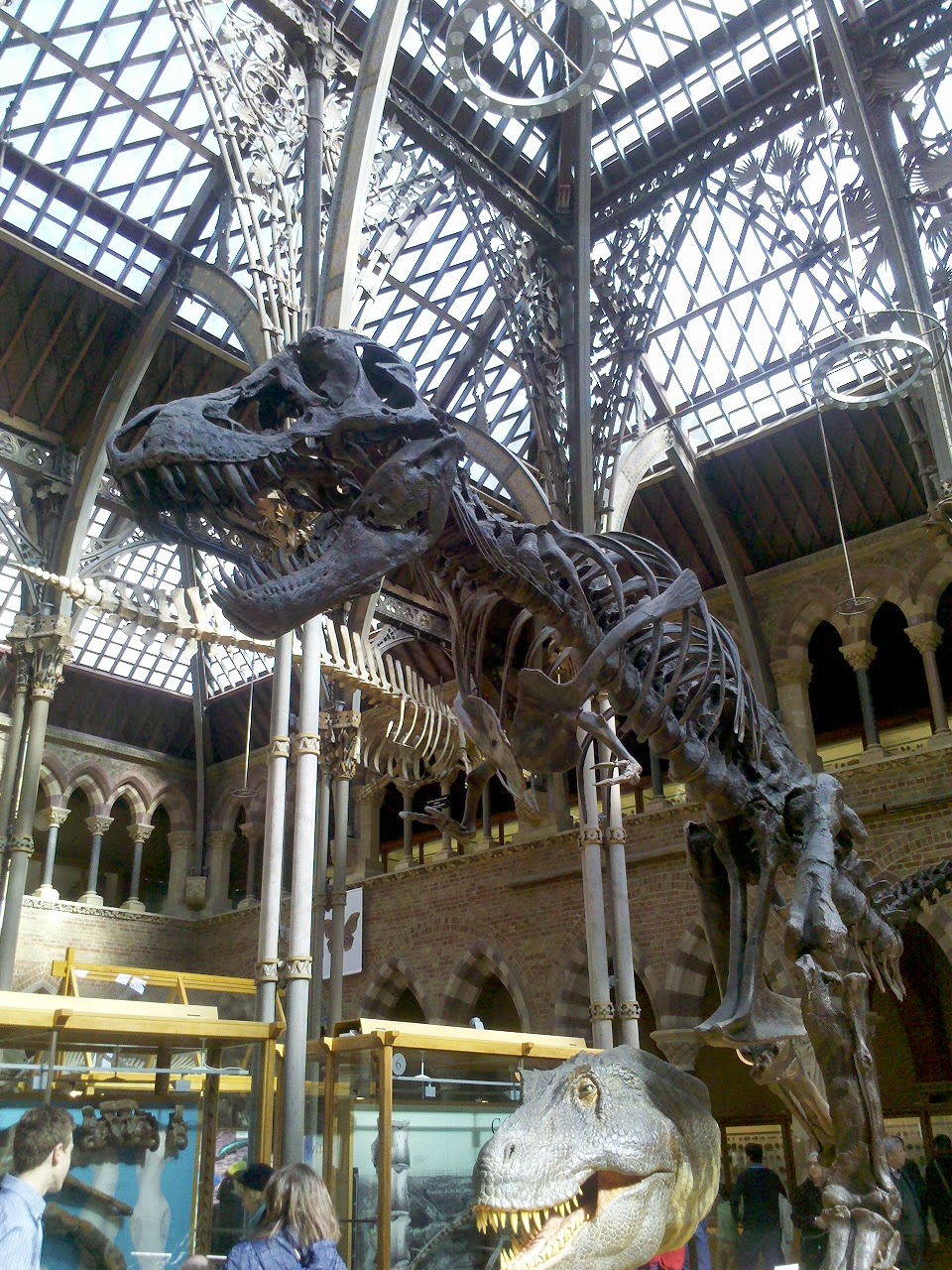 Once I walked into the room, I laughed aloud.  It was 19th Century Anthropology Overload.  It’s magnificent and mad.

Pitt-Rivers was an amazing collector, with connections to collectors, explorers, and ethnographers who worked all over the planet.  The Pitt-Rivers Museum’s website is a great resource for visualizing the collection, and exploring as much as they have been able to reveal so far online.  All of the items collected were either given to the collectors as gifts, or purchased from the people who created the artifacts, and then donated to the museum.  The Pitt-Rivers site also describes the rationale for having all of these cases arranged as they are:

“In most ethnographic and archaeological museums the displays are arranged according to geographical or cultural areas. Here they are arranged according to type: musical instruments, weapons, masks, textiles, jewellery, and tools are all displayed in groups to show how the same problems have been solved at different times by different peoples. The cases appear to be very crowded, as a very large percentage of the collection is on view. In some instances the ‘displays’ are primarily visible storage, due to the museum being first and foremost a teaching and research institution and the curators are also university lecturers in either cultural anthropology or prehistoric archaeology. A number of degree courses are taught to both graduate and undergraduate studies. If you look carefully you will see that actually a great deal of information is provided about individual objects. The small labels, many of them hand printed by the first Curator, are very revealing. We offer more contemporary interpretative displays in our special exhibition gallery.” 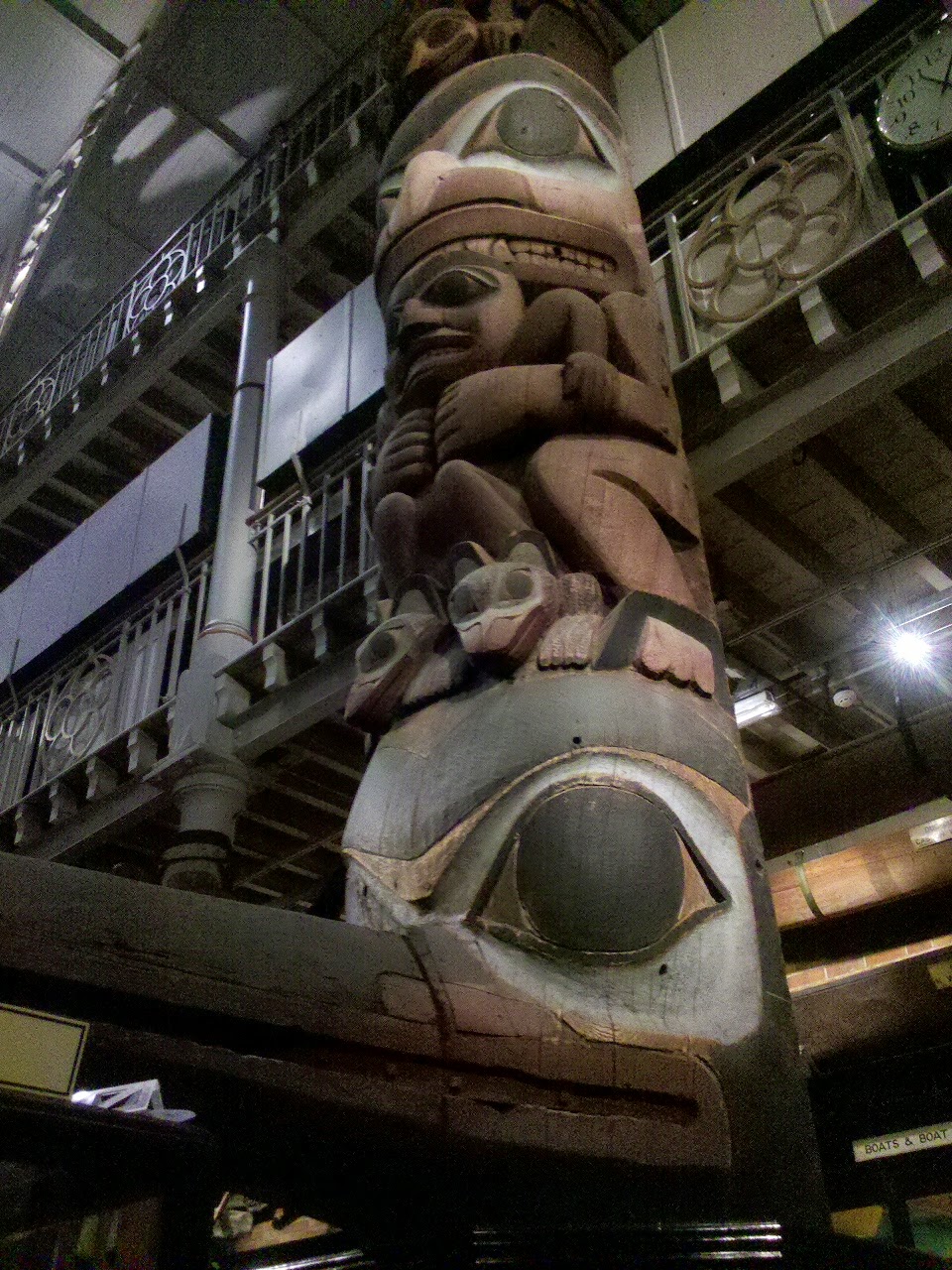 My problem (you knew there was going to be a problem, didn’t you, I’m just having that kind of week) with these sorts of museums/collections is that they make it terrifically easy for those who are prone to think in terms of Human Universals to continue to think that way.  While a nuanced reading of these packed cases allows us to see the variety of ways that people approach similar natural phenomena, or social phenomena, there is a curious flattening effect that can occur when so much variety is put in a glass case.   It becomes “people all play music!”  “people all represent animals!”  “people do body mods!”  And in the drawing of connections, the distinctiveness of each culture can be lost.

While I value tremendously the sense of shared humanity that anthropology can bring, I think it’s dangerous to take collections of human artifacts from the 19th century, a time of tremendous cultural upheaval and colonial violence, and draw uncomplicated inferences about the shared human condition.  I should be clear here that I do NOT think that is what the Pitt-Rivers museum or their (fantastic) staff are doing.  I do think that this sort of museum is most effectively experienced with some sort of mediation.  The context in which these artifacts were collected is as important to the meaning of the museum as are the artifacts themselves.

The most striking case for me was this one: 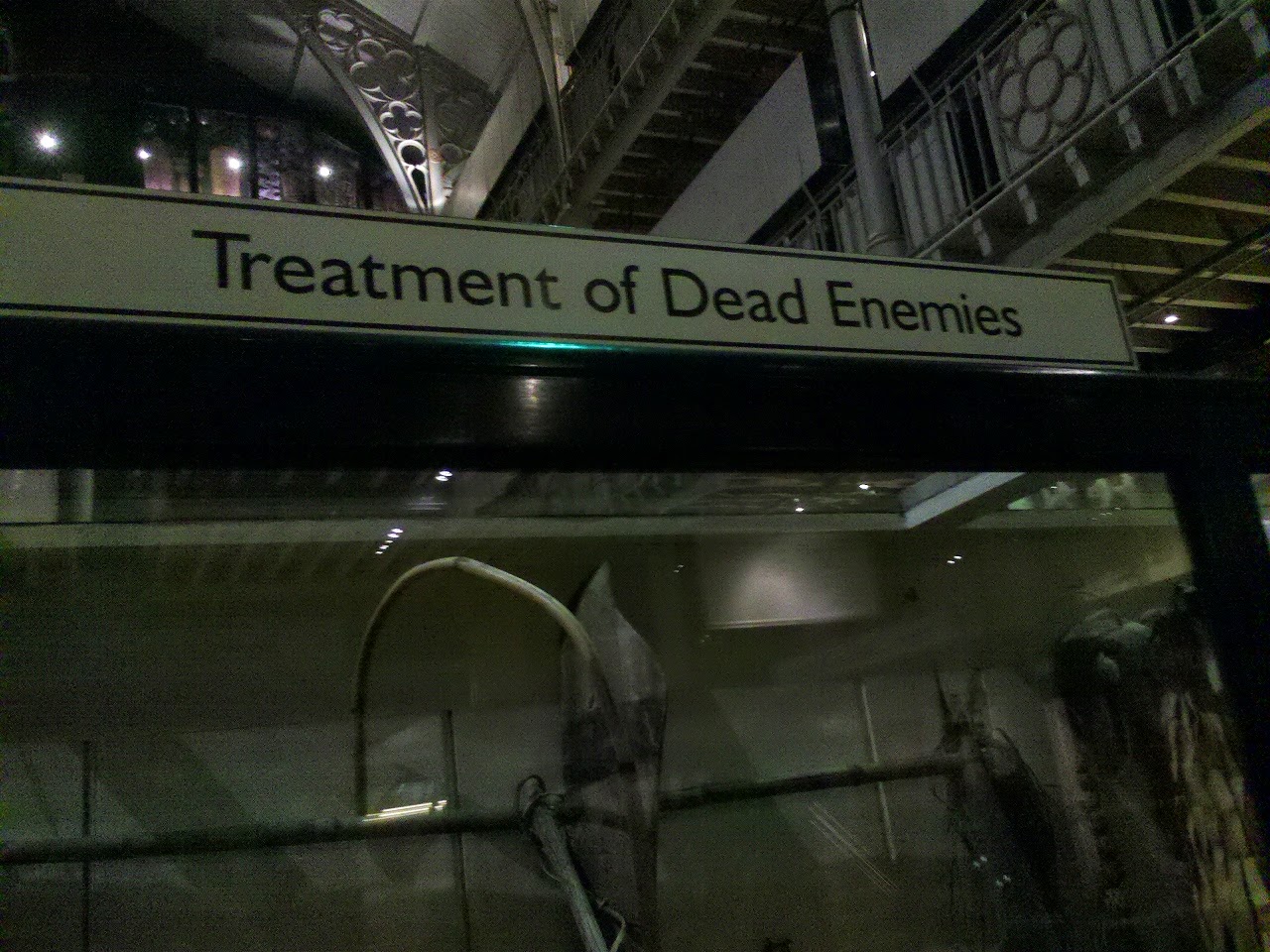 Many of the human remains in this case (a two-sided case) were from South American and Papua New Guinea.  They are fascinating, repellent, sad, fierce.  They deserve a book (at least)  all to themselves.  How can we interpret the meaning of these remains in the isolation of the glass case?  How do we dare? 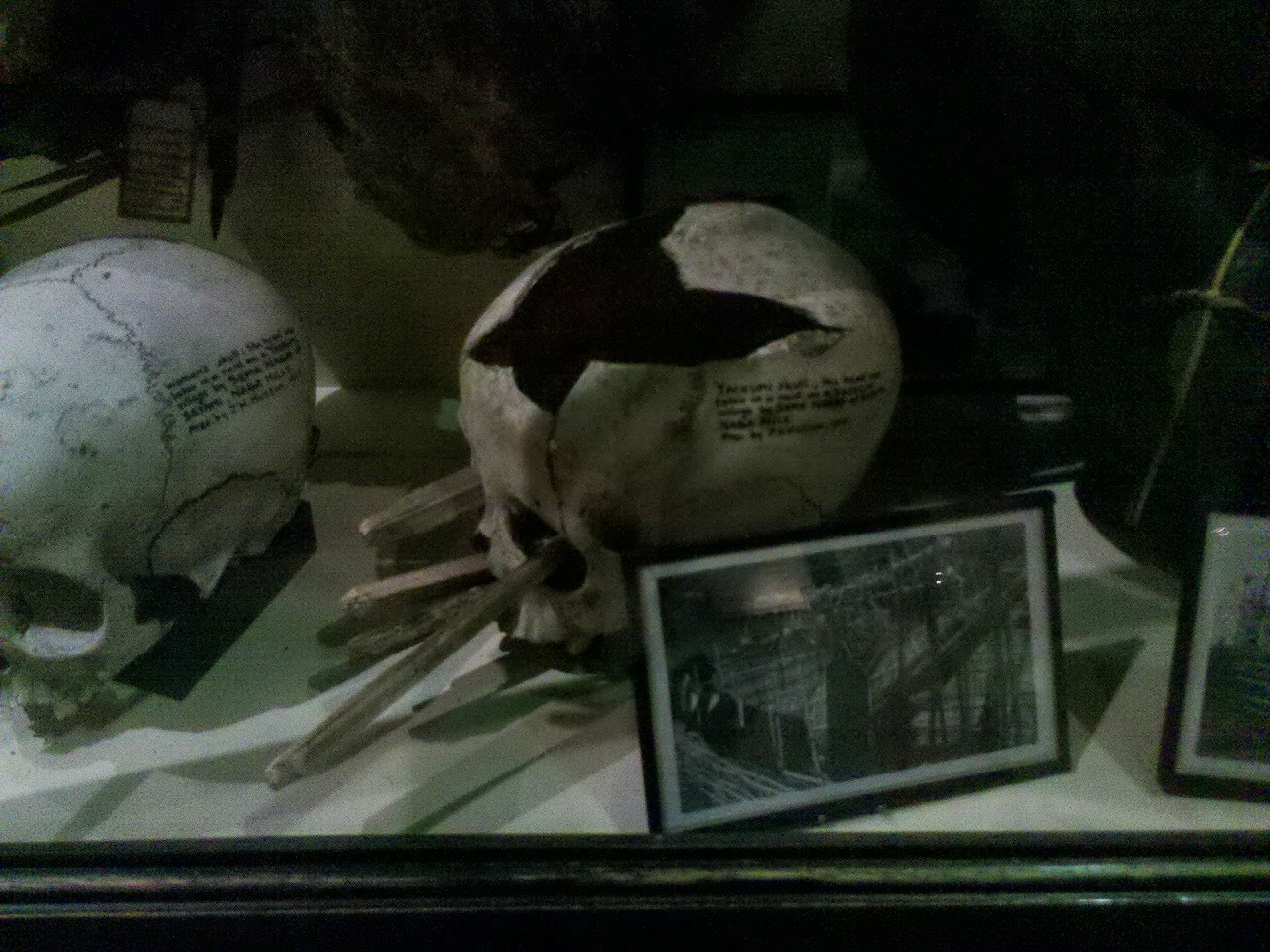 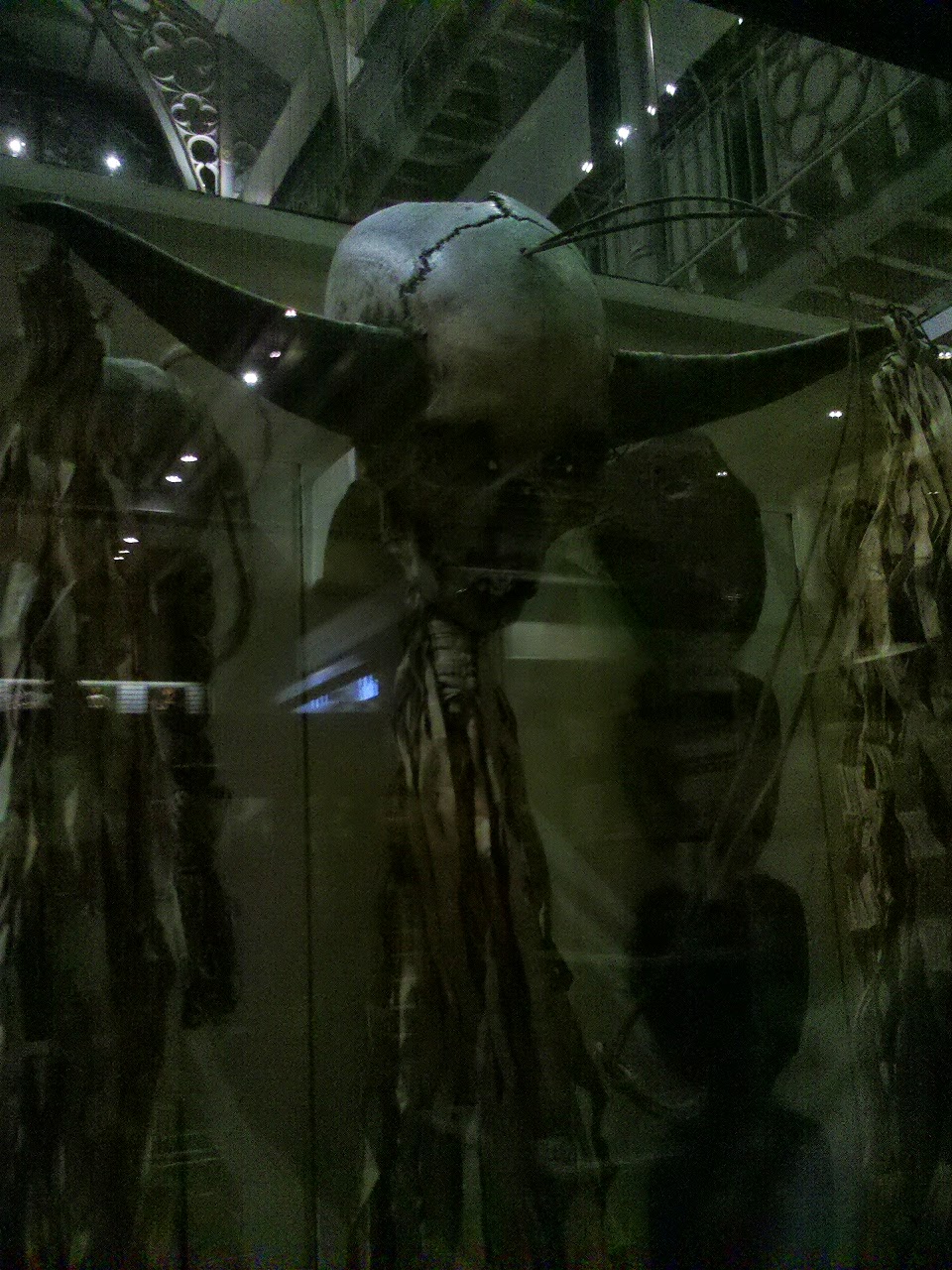 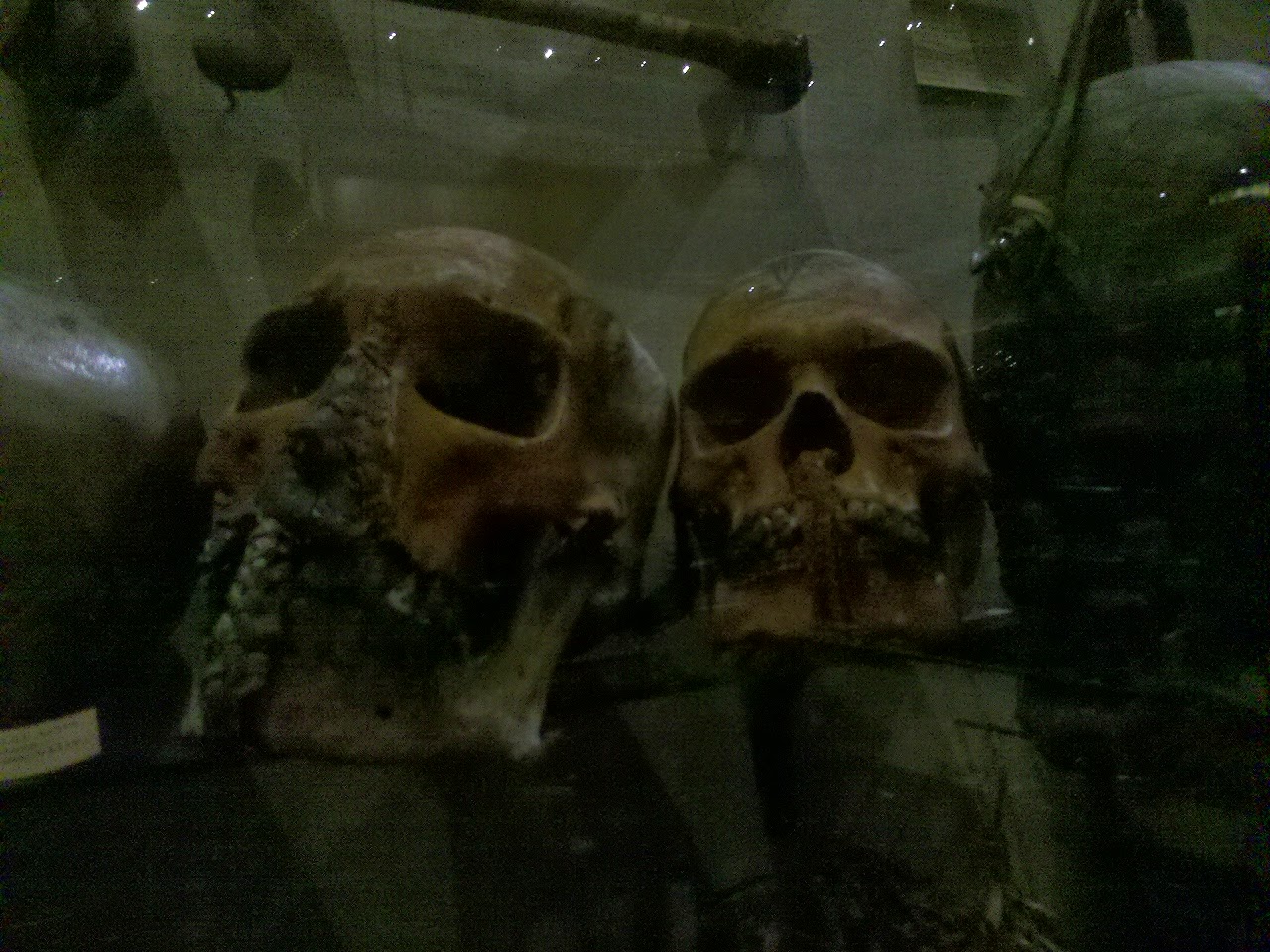 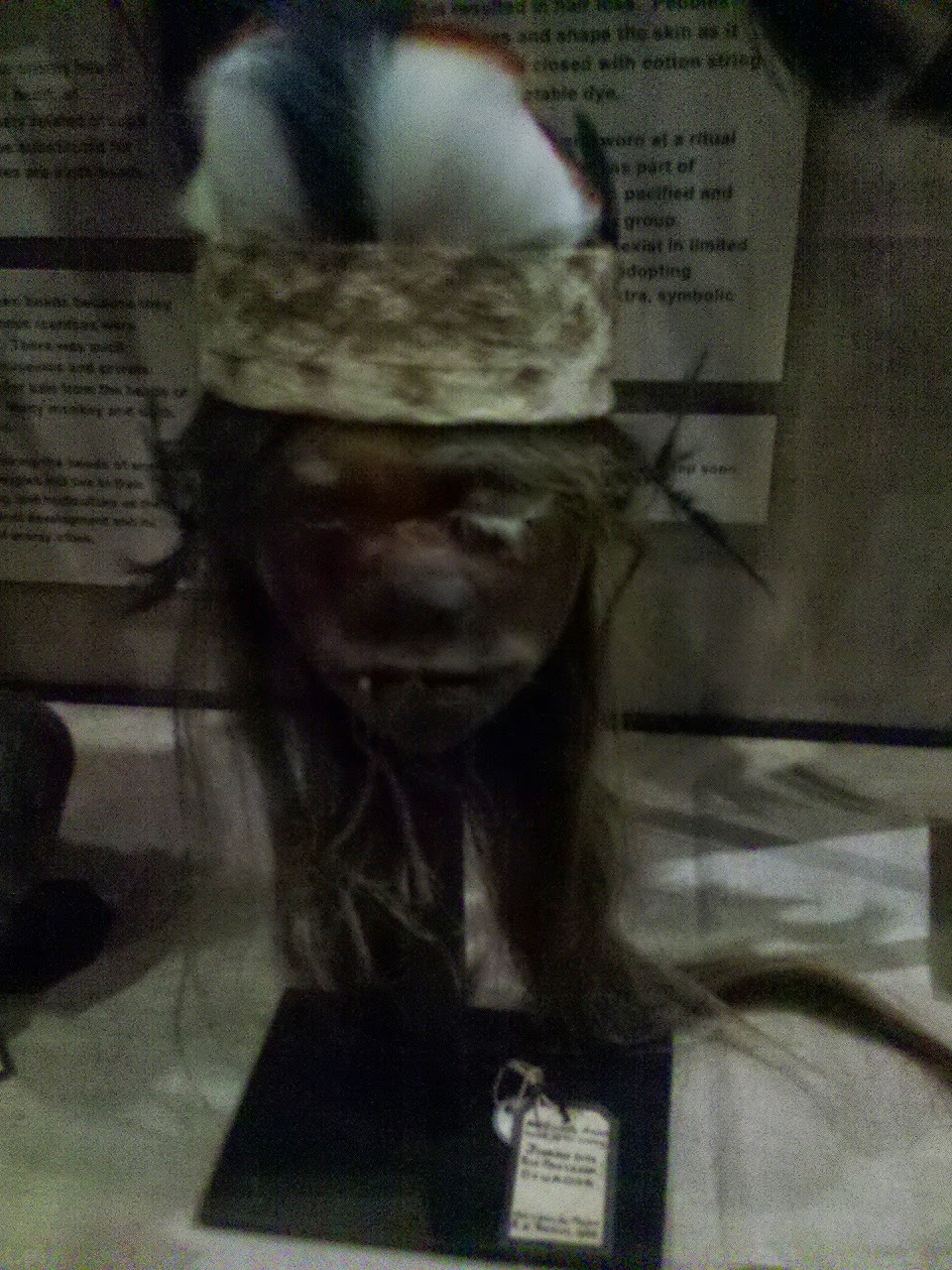 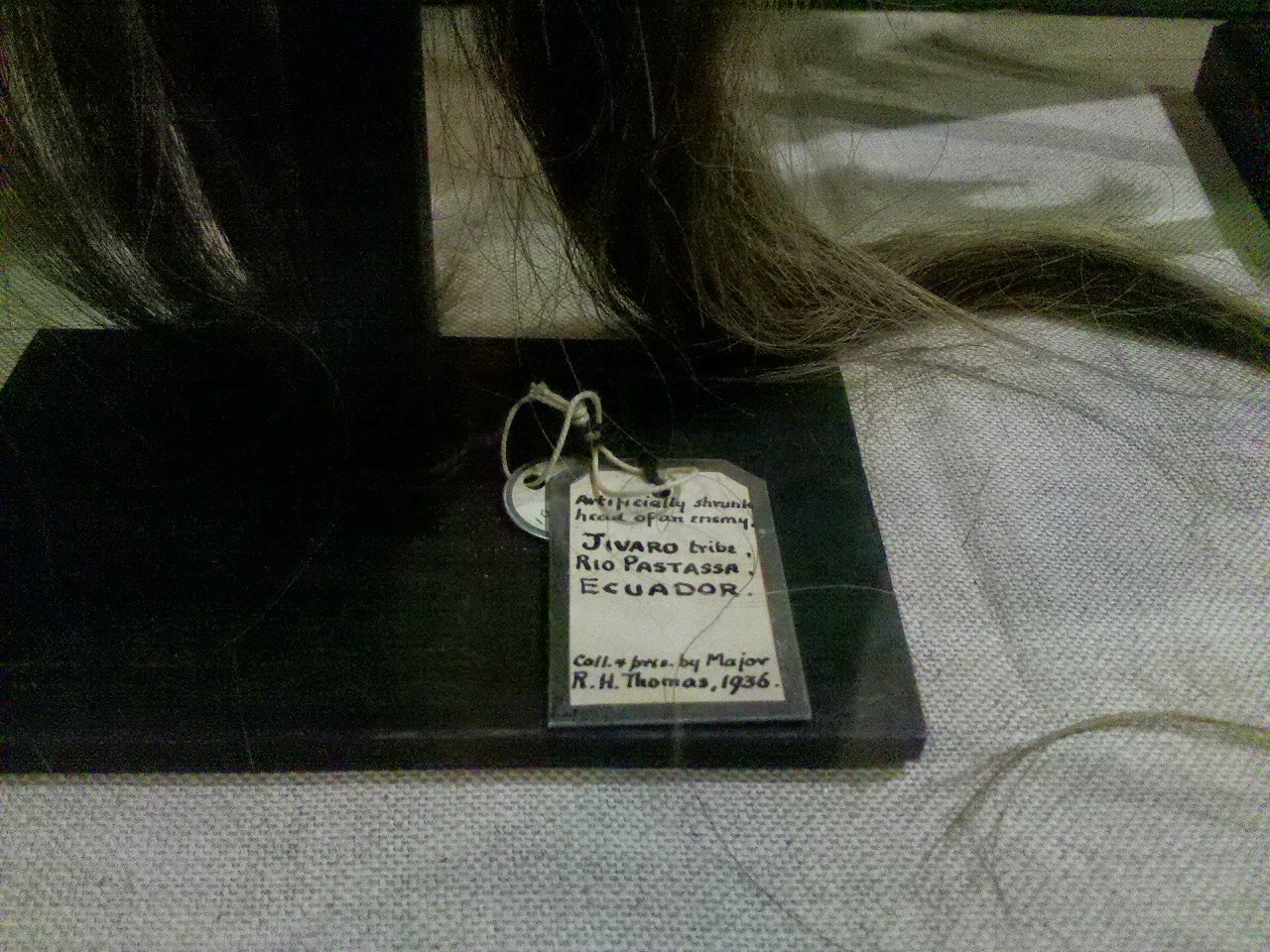 It occurs to me that the Pitt-Rivers collection is of a piece with the Regency House in London that is now Sir John Soane’s Museum .  The architect Soane (who is one of my favorite people only because he designed the TARDIS)  filled his house with furniture, bits and pieces of sculpture, architectural details from buildings, some of it copies some of it originals, from all over Europe, from Egypt, and parts of Asia, in the grand tradition of colonial Britain.  He put together disparate pieces on the same wall, in the same room, according to what he thought went together, regardless of where it came from, of the lost intentions of the people who made it.  He was a magpie, plucking attractive things from their original location, and decorating his own home with them.

I think it’s worthwhile (and I know this is not an original thought on my part) asking what the purpose of such collections was, and is today.   Is it to illuminate the study of form (as was clearly the case with Soane)?  Of function?  Of meaning?  Yes, of all three.  But collections of objects disassociated from their origins,  I think say much more about the collectors of the objects than they do about the the people who created them.

The Pitt-Rivers museum has a great deal of contemporary interpretation to overlay onto this collection, and their upper galleries take on some of the issues of representation and collections like these.  I suppose everyone can visit the museum they think they are in.  My preference would be that visitors to museums like this be directed very explicitly to the particular nature of collections like these, how situated they are in history, how important it is to approach these objects thoughtfully, as a way of thinking about the people who produced them, not just the scholars, explorers, and colonists who acquired them.