Last week I went to hear Mary Flanagan speak about play, creativity, games, and how to think about social change in the context of game design and production.   And this weekend, I’ll be attending another THATCamp, this one THATCamp Piedmont, at Davidson College just up the road.  The prospect of going to another unconference, the content of Flanagan’s talk, plus the recent experience of opening our new north entrance spaces at Atkins library, have been making me think a great deal (even if I haven’t been blogging that amount) about the material nature of our thought processes–or, frequently, the lack thereof.

What I mean is, there are times when students walk into the library with nothing in their hands but ideas in their heads, with a need to share those ideas (and get inspired by new ones) with colleagues.  The physical environment they need for idea sharing is one that we’ve provided in the library:  furniture near whiteboards. 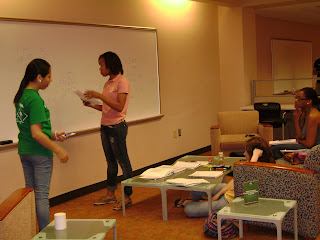 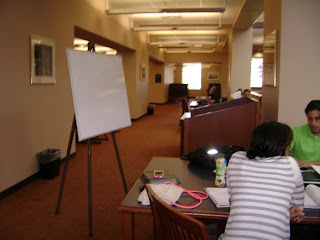 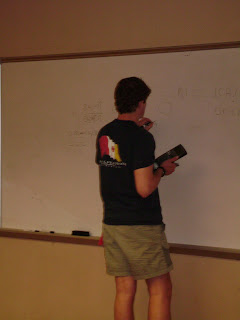 They can sit on couches, chairs, or at tables, and either use the whiteboards we’ve provided that can be moved around, or settle in spaces where you can write on the walls.  Sometimes (many times) they bring laptops in with them, sometimes they bring books and notes with them.  They work in groups, or they work alone. 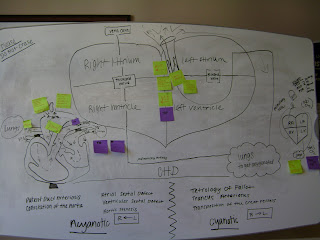 Sometimes, what they write on the whiteboards needs to go with them when they leave–if they are sketching out a work plan for a group project, if they are outlining a rough draft for a paper, if they are taking a problem set and solutions home.  They often take pictures of the whiteboard (and the information they intend to curate) with their smartphones.  This (on the right) is a good example of an elaborate study guide, using not just a whiteboard but also post-its.  This diagram of the heart stayed on this whiteboard for several days during final exams last semester.  We are actually thinking hard about what it would look like to have smart whiteboards, that could allow for the saving and sending of the stuff that students write down. 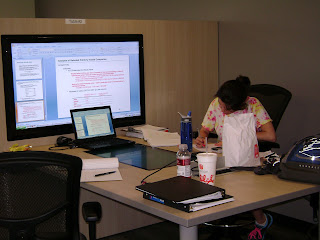 Sometimes, what they write on the whiteboards is not the important product of the study session.  When they need whiteboards to help them think, when the product is greater understanding that they can take with them in immaterial ways, there is no need to save the ephemera of their academic work.  What they write down will not be transformed immediately into another thing, does not need to be curated in the same way that a rough draft or a presentation outline would be.  We don’t need to always assume that they need to take it with them

The hard part is that we in the library don’t know which kind of work a student is engaging in at any given time–that’s why it is terribly important to build flexible spaces, that allow for patrons to have real choices about the work they need to do.

It is in thinking about the ephemera of academic work that I was confronted by a design flaw in our new T1 Vision tables, in our north entrance study spaces.  These tables (shows upper left) have a touch-screen embedded in the table that can be divided into four, as well as a large sharing screen on the adjacent partition.  The large screen for sharing is only activated when a device is plugged in (or, in only a few cases in the touch-table applications).  So, in this photo, the student has plugged in her laptop, and what is on the laptop is shown large on the screen for her study partners to see.  If one of her study partners found something while browsing the web on the touch-table that she wanted to share, that’s currently not possible. And that does not fit with the way students work–they need to be able to share and think about things that come up during the session, not just what they have with them when they arrive at the library.  The T1 tables dole out sharing capability as if the stuff that is savable/curatable is more worth sharing than the ephemera, and that is not true.

Sometimes, academic work does not produce a material artifact.  Sometimes, play does not take place in a score-keeping game, sometimes, play is open-ended, sometimes there are no winners or losers.  But thinking is important, creativity is important, and it’s crucial for the library to produce and equip spaces that don’t just allow our students to write papers and pass exams, but also for them to think, to share ideas, to brainstorm, to bounce ridiculous notions off of each other that may go nowhere. 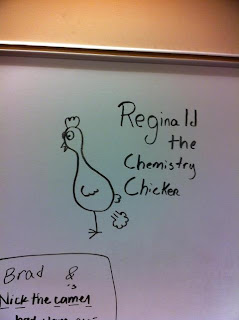 That’s a “knowledge cloud,” according to the student who drew that.  Thanks, Daniel W.

So, this lovely series of photos from stumbleupon shows a lot of university library reading rooms, primarily from old, historic libraries such as reading rooms at Oxford, UK, or in historic American universities such as Harvard, or UC Berkeley.

I’m struck by how few people there are in these photographs.  I understand that the photographer was probably more focused on the beauty of the spaces, but it seems to me that the true beauty of a library is in what the space provides in terms of the potential for people to think and work. So, yes, some of these lovely spaces do that.  But we can’t see that in action in these spaces.

We are getting new spaces in Atkins, and I’m curious to see how they facilitate student work on campus, and what kind of work ends up being done.  The new north entrance to Atkins will be more than just a new doorway, there will be a large group study/conference room, and open spaces designed for collaborative work as well.

We’ve got spaces on the ground floor that have experimental furniture in them, and it’s still unclear if students are using the furniture (like this mediascape table) in the way it’s intended.

There are also spaces on the 1st and 2nd floors in particular that are still relatively unconfigured–we haven’t really decided what we want to put in there long-term, so students are arranging those spaces themselves.  I am going to be starting the New Year trying to investigate what students want out of these open spaces–what kinds of things are they trying to do, what kinds of things are they successful in doing, and what informs that success?

Finals are nearly over–where are you doing your best work in the Library?  What do you wish these new spaces to do for you?