So I’m thinking a great deal about control in libraries, and have been for a while.  It is sending me back to the point, late in my graduate career, when Laura Nader’s Controlling Processes essay came out, and when some of my classmates were working with Nader’s paradigms in their own research.   Her argument is, in part, that tracing, describing, and analyzing the flow of power within systems is crucial to illuminating the potential to transform cultural ideas.  The redistribution of control in the law, in medicine, and in museums was the focus of her 1997 essay, but of course many institutions are fair game, and libraries are no exception.

Libraries are rife with controlling processes–they are cultural institutions infused with very particular senses of what scholarship and studying looks and sounds like, what the proper material environments are for such activities, what resources should be provided by institutions (and what should not be).  Rules around noise and quiet, consumption of food and drink, occupancy of space (when is the library closed?  Does it close?  Who is allowed in?  Who is prevented?) are all performances of library institutional control of library spaces.    These rules are shot through with power–who determines what is quiet?  What is noise?  Who makes the decision about who is allowed in the library?

Signs are great evidence of the attempts to control spaces in libraries.  “Quiet Zone.”  “No Phones.”  “No eating or drinking.”  “Silent Zone.”

The LSE is trying to address student demand for space with a “ticketing” system.

A lot of the conversations I participate in around configurations of library space involve me, at some point, advocating letting go of control.  Is there a noisy space in your library?  Why is that?  Maybe you don’t need to “fix” that?  Maybe just label it as such and move on?  Where are there “naturally” quiet areas?  Do they need policing to be that way?  Maybe they are not so “natural?”  Why are you trying to make atriums Quiet Zones?  Where do students go who need to talk to each other about their work?  Do you want them in your library?  Why or why not?

Are you sure about all of that?

This is a big part of my work.  Asking annoying questions.  But it’s also my job to pay attention to more than my personal theory that less policing in libraries is a good thing.

Because the thing is, that students are also asking the library for controlled spaces.  Tomorrow is the Last Day of Classes (#LDOC!) for students this Fall semester at UNC Charlotte.  The library is already full of people, and will only get more full.  This is the time of year when we get the most requests for protected spaces, reserveable spaces, for quiet spaces.  This is the time of year when requests for control are most acute:  make them quiet, make these computers available, give me space to think, give me space to talk, make them move so I can do my work, make this print.  The student sense that there is so much they don’t have control over spills out into the demands they make of their institutional spaces (I’m willing to bet they have demands for their living spaces this time of year, too, with regard to noise and quiet, access, technology, clutter).

If we think carefully about the nature of controlling processes in the library, what they do and who they are for, we need to remember that one of the defining characteristics of libraries is, in fact, control.

Libraries are constructed in part in contrast to the perception that everything outside of their spaces is uncontrolled.  The environment of the library is physical spaces, resources, and the people within the library.  Some of these things are easier to control than others.  The implications of controlling people are myriad, and not entirely benign.  Who is perceived as out of control?  Under what circumstances?  Is there another interpretation of their behavior?  One person’s “out of control” is another person’s “engaged conversation.”  These differences need to be navigated, negotiated, explored, not enshrined in rules.

Libraries in popular discussions of public spaces are often described as “oases” (for example, most recently and visibly, but not unproblematically, the public library in Ferguson).   Discussions around public libraries are of course infused with the same complicating factors of race, class, privilege, and politics that are present in any discussion of the public sphere, in the US and elsewhere.  One person’s “riot” is another person’s “protest.”

Of course non-library spaces are controlled, too.  And holding the library up in contrast to “chaos” is often an unnecessarily antagonistic way of framing the rest of reality.

I find myself sympathetic to the desire to find one place in the world where you can feel that things are controlled, if not by yourself, then by someone you trust.  Students trust libraries to control their environment, as students frequently feel they themselves cannot.

So while we listen to that desire for control, we need to not abuse that trust, and we need to listen deeply and carefully to what is behind it.  We need to trace the requests, listen to who is asking, consider what the mechanisms for effective control might be.  There are many models–they do not have to all be top-down.  I think about community self-policing.  I think about wide and varied student engagement in library spaces so that they are part of the solutions they want to see, not just demanding that someone else execute policies on their behalf.

What does control look like?  When is it strictly necessary?  When can it be let go?  What happens then? 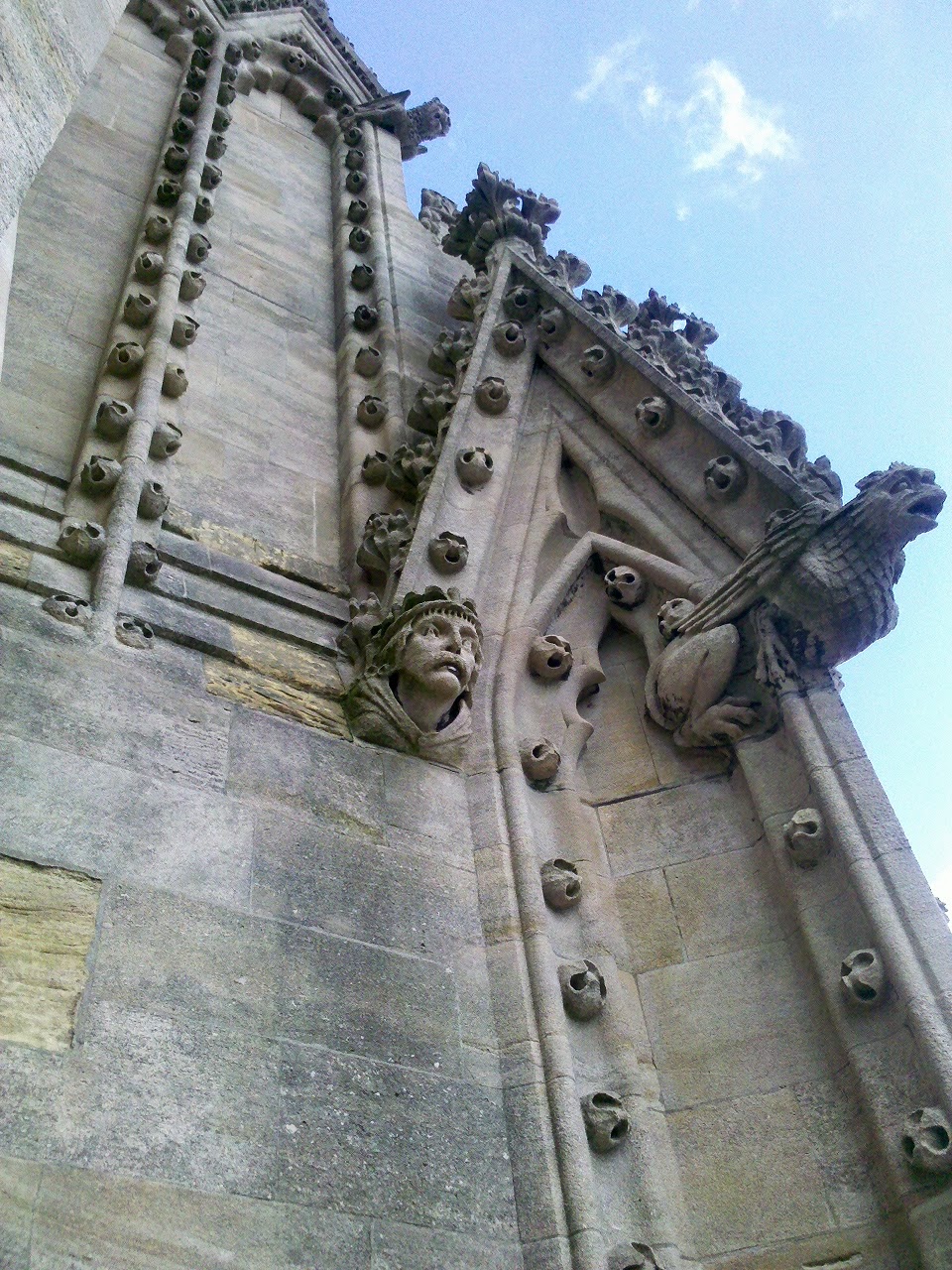 So in addition to working in London, I had a couple of chances to do field trips to Very Special Libraries, one in Oxford, and one in Manchester.  The one in Oxford I’ve known about for a while:

Oxford is lovely, old, and filled with high walls, locked gates, and closed doors.  It is a secret society, I will never know the handshake.
— Donna Lanclos (@DonnaLanclos) March 22, 2014

I know, I know, Oxford is not a “public” university, there should be different notions of access, I cannot expect the walls and gates and doors of Oxford to be open to all comers, because it’s just never been that way.

But the collective experience of the closed-off feel, the tour wherein we were assured that the most important people in the building were The Scholars (and therefore, Not Us), and signs like this:

really hammer it home–“This is not for you.”

The Rylands Library, on the other hand, is a Special Collections library associated with the University of Manchester (a red-brick state school). 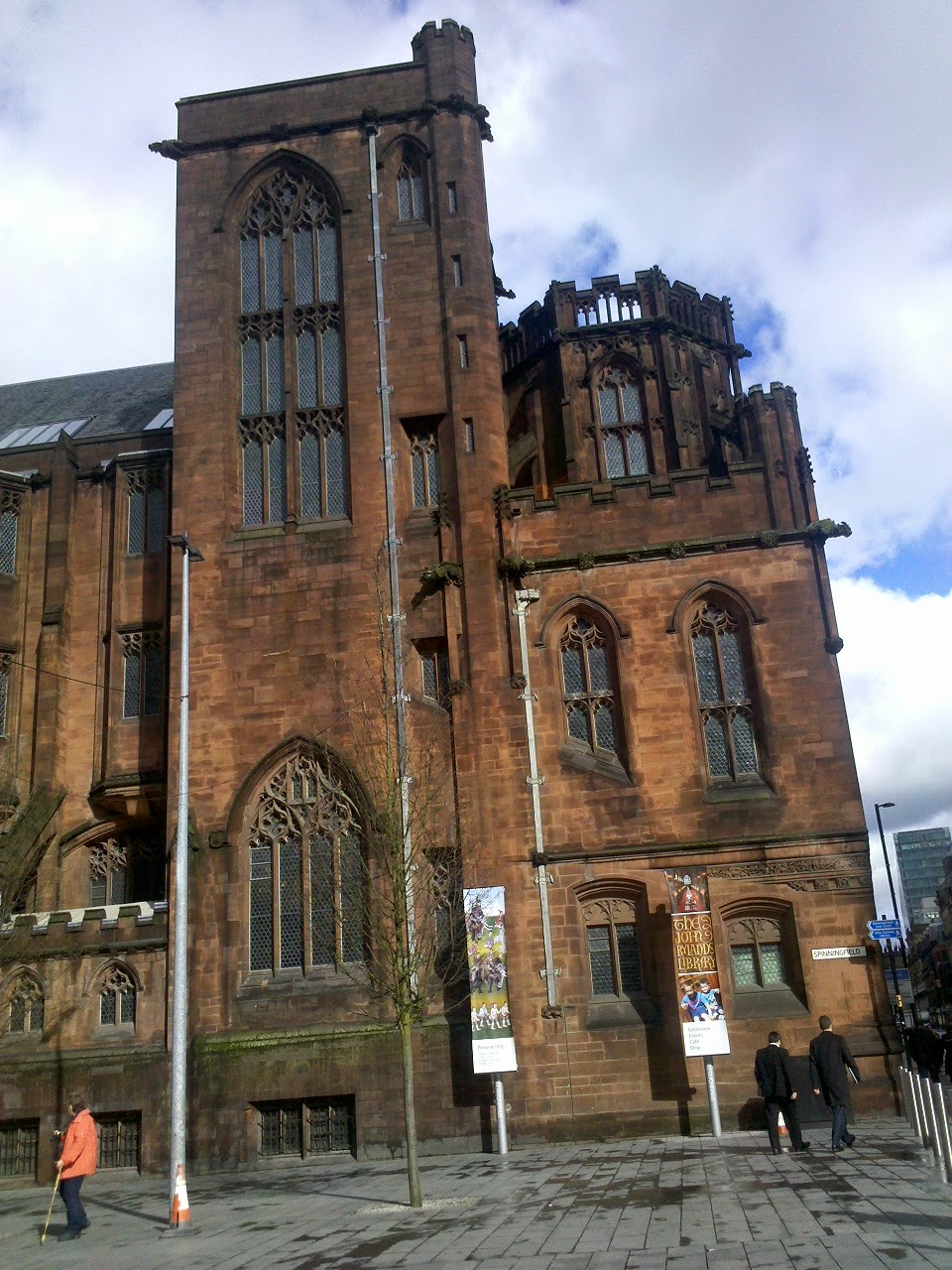 You can walk right in, no charge, even if you are not a student (which is not necessarily the case at UCL, even, where you have to swipe your bar-coded-card to enter every library, and most of the academic buildings).  The Rylands is a Gothic Cathedral to knowledge (I’ve blogged about libraries that make me think of ecclesiastical monuments before), and the reading room is open to anyone who wants to work in there, even if they are not working with the Rylands collections.   It’s a beautiful building, and a rare example of an inspiring space that is also accessible. 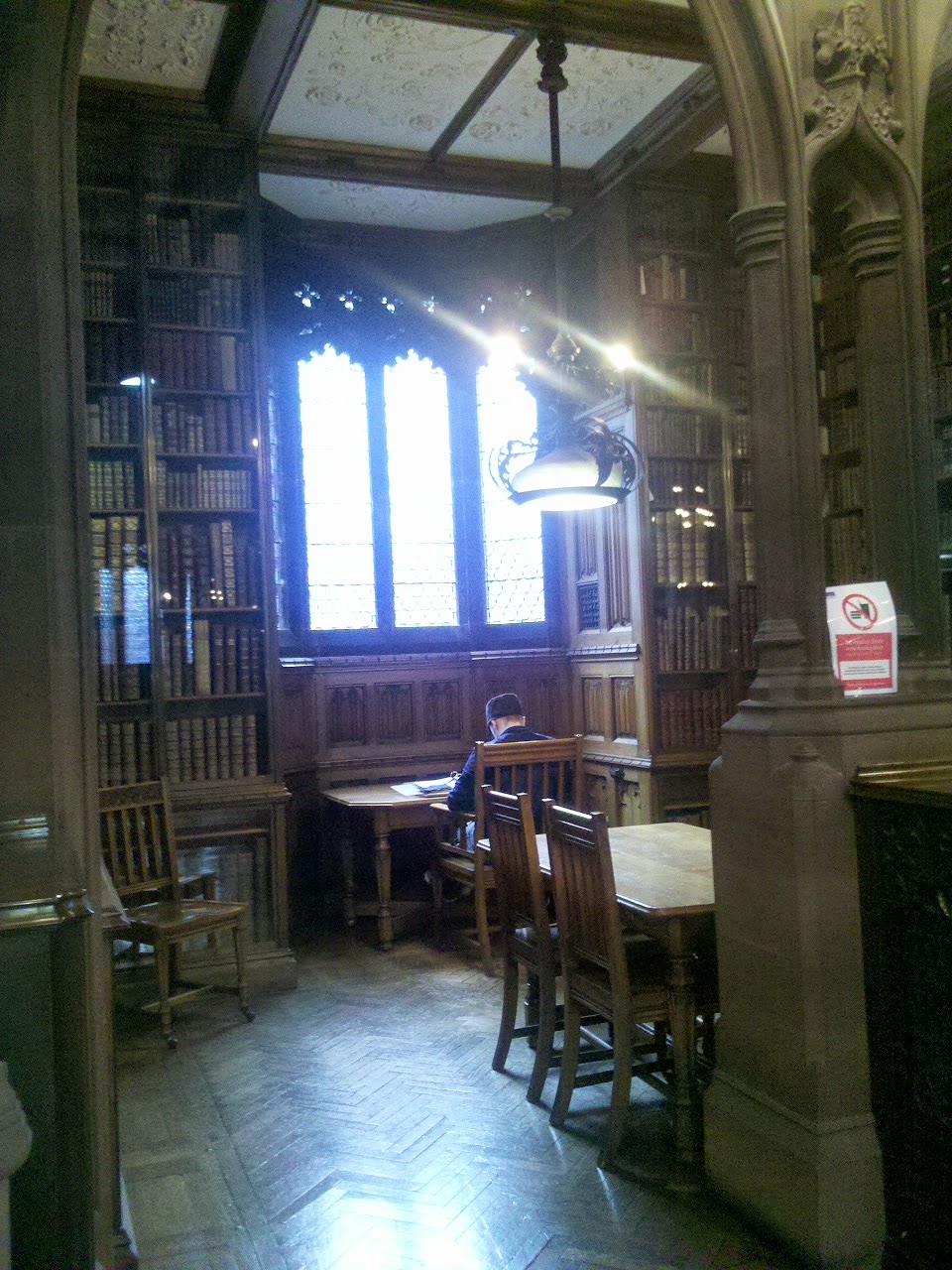 We talked briefly in our Spaces, Places and Practices seminar about the impact of spaces, in particular Traditional Library spaces that invoke places like the Bodleian and Rylands.  But Traditional Library spaces, while they can be used by students and faculty to get themselves into a desired state of mind (for reading, for writing, for scholarship of various kinds), can also feel exclusionary.  It’s as if some students internalize the signs that the Bodleian puts up (and sells in their gift shop!), and transfer that to all library spaces.  It’s not enough to be respectful of the space, you have to act so that they cannot tell you are there.  SILENCE.  I understand the utility of focus and quiet.  I understand less the signals that emphasize the otherworldly nature of scholarship to the point of alienating people from the traditional places of scholarship.  I am not convinced they are necessary.

They also make me want to stomp my boots and dance around in the courtyard of the Bodleian.

Well this is what many of you begged and pleaded for. It’s happening– a 24 hour library. It will be 5 days/week up until reading day, and then 24/7 for the rest of Finals.

So, what are you doing in the 24 hour library?
Group study?
Paper writing?

What are the advantages to you?
What problems are you encountering?
Etc.

The Quiet/Not Quiet Troubles plague University libraries worldwide, I think. It is, at the very least, an intense problem locally, here at UNCC. It seems to me that there are legitimate work-based reasons why people want to be noisy (well, reasonably so) in the library. Think of: group work, studying in pairs. And there are time-honored and important reasons to need quiet in the library.

And so, we have group study rooms. Noise contained in a room, people outside the room are happy in their quiet. But, what about when those are full? What then?

Is the first floor really ever going to be a quiet space? Is it reasonable to expect it to be? Should we continue to spit in the wind, putting furniture on the first floor, high-traffic areas, that signal “quiet study here?”

What if much of the first floor was an open space with places for both group and individual study, but with very little expectations that the space be “library quiet?”

Where, then, should the quiet spaces be?